My friend also had a prophetic vision of Trump in which she was told he was the FINAL TRUMP…THE TRUMP OF GOD! I have chills now just typing this. WE MUST PRAY NOW like never before. HalleluYAH we serve an awesome God!!!!

The message below by Nita Johnson, a prophetess and founder of The World for Jesus Ministries, was sent to her mailing list on 4 March 2016. What is interesting is that things do seem to be shaping up according to what Sister Nita has shared.

I want to share something with you that I believe will be very meaningful. However, before I do, I want to ask all of you some questions.

What are you looking for in a President? A born-again Christian or God’s choice? Do you want someone that will impress the Nations or do you want someone who will accomplish God’s purpose? When you pray that God will put His man in office, what does he look like to you?

There are two extremes (and everything in between) who are now vying for the Presidency. On your right, we have an outspoken and opinionated Donald…

As per the dictates of the Holy Spirit:

This blog will now be award free. Please do not nominate me or this blog for any awards. Your nomination is appreciated but I must follow what HE wants. All praise and glory to HIM ALWAYS!
Isaiah 42:16 I will bring the blind by a way they did not know; I will lead them in paths they have not known. I will make darkness light before them, and crooked places straight. These things I will do for them, and not forsake them.

Persecution of Christians, children being chopped to pieces 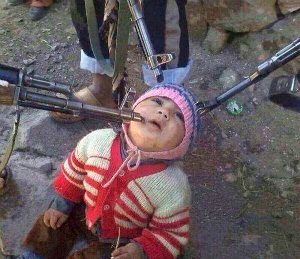 ADONAI, you have probed me, and you know me. 2 You know when I sit and when I stand up, you discern my inclinations from afar, 3 you scrutinize my daily activities. You are so familiar with all my ways 4 that before I speak even a word, ADONAI, you know all about it already. 5 You have hemmed me in both behind and in front and laid your hand on me. 6 Such wonderful knowledge is beyond me, far too high for me to reach. 7 Where can I go to escape your Spirit? Where can I flee from your presence? 8 If I climb up to heaven, you are there; if I lie down in Sh'ol, you are there. 9 If I fly away with the wings of the dawn and land beyond the sea, 10 even there your hand would lead me, your right hand would hold me fast. 11 If I say, "Let darkness surround me, let the light around me be night," 12 even darkness like this is not too dark for you; rather, night is as clear as day, darkness and light are the same. 13 For you fashioned my inmost being, you knit me together in my mother's womb. 14 I thank you because I am awesomely made, wonderfully; your works are wonders -I know this very well. 15 My bones were not hidden from you when I was being made in secret, intricately woven in the depths of the earth. 16 Your eyes could see me as an embryo, but in your book all my days were already written; my days had been shaped before any of them existed. 17 God, how I prize your thoughts! How many of them there are! 18 If I count them, there are more than grains of sand; if I finish the count, I am still with you. 19 God, if only you would kill off the wicked! Men of blood, get away from me! 20 They invoke your name for their crafty schemes; yes, your enemies misuse it. 21 ADONAI, how I hate those who hate you! I feel such disgust with those who defy you! 22 I hate them with unlimited hatred! They have become my enemies too. 23 Examine me, God, and know my heart; test me, and know my thoughts. 24 See if there is in me any hurtful way, and lead me along the eternal way.

The Internet home of authors and analysts Derek and Sharon Gilbert

Live the Hustle. Love your Life.

A Virtual Hebraic Church for the Saints Scattered Abroad

Breakthroughs In Seeing and Hearing Jesus

A Lifestyle of Love.

Preparing the Remnant for the Unfolding of End-Time Prophecy

Every knee shall bend in Your honor my King!

It's all about Living, Working and Transforming here. Work life balance is the focus on this business and lifestyle blog. To assist self employed, it's about personal development and being an entrepreneur.

The next great event in Bible prophecy is not the Rapture or Tribulation. It is the Second of the Four Signposts - Iran's great invasion of the Middle East. Are you watching? Are you preparing? Are you telling your brothers and sisters, pastors and elders?

and other critter's too!